I was notified today that my Writing.com account celebrated its five year anniversary.

This sort of blew my mind.

Five years ago today was the first time that I had plugged into a search engine "writers' support" like I was in desperate need of a hotline that would rid me of this insatiable habit. It started with my first new computer in a strange new place (New Iberia, LA) where I was alone with my children for a good portion of time. We had no internet.
So in the middle of the day, when my one year-old was sleeping and my five year-old off at school and our meager belongings were righted in their places, I wrote a title.

It was a game that we had chosen to play to lighten the mood after my daughter's life-long delicate stomach issues had yet to resolve themselves (five years later, she is much better, thank you).

I had no intention of moving beyond the one simple question. But later in the day, I had written another title. And then another until the page was full of the one-line statements arranged themselves in a non-sequitor poem on the blinking white screen.

I left the page alone for weeks.

Then one night, after the children were in bed I wrote my first story about Magnolia. And I laughed at the silliness of it all. I peeked through the windows because I was embarassed about clicking away on the computer with no particular agenda. If someone would have knocked on my door, told me that I would go to college for English (English?! You've GOT to be shittin' me.) and spend the majority of the next five years working on some great process of becoming a writer, I would have scoffed and choked on my Jameson Egnogg Coffee cocktail.

Not me, I would have said, tipping my head a little lower. "I'm just a mom."

"I'm just a mom" was my token excuse for years. It helped me get out of being accountable for my dreams and passions. It was the easiest way to overlook potential. But even being "just a mom" couldn't really help me overcome this storytelling compulsion. I'd write my nightly story, usually about the eccentricities I noticed in others, and tuck them away on my desktop and resume motherhood. It became my shameful indulgence. I regarded my stories in the same way one regards being a closet smoker or drug addict. But I kept going.

Within a year, I emailed my mother a story. I remember my stomach twisting in some unexplainable horror when I sent it. It was too close to who I was, and I really didn't feel comfortable with sharing that. My mother became my worst enabler (and remains so to this day). I couldn't help it. Letters to words to thoughts strung webs through my brains until there was nothing left to do but release them onto the back of a bill or an old piece of homework or my wrist. I began pulling over mid-commute to drop a few mischievious words that, though they were probably strange bedfellows, looked good together. Writing made my daughter late for school on more occasions than I'll admit.

Then on October 1st, 2008, I realized that this love affair with writing was unavoidable and needed to be dealt with. Five years ago today.

And today--tonight--I sit at a computer with notbooks stacked up to my eyeballs full of stories and thoughts. The dishes still need cleaning. The living room is a wreck. And instead of switching over the laundry, I had to stop and spill out a few extra words rambling around in my head.

Five years ago, I had an addiction. It was a fiery, fearless and whimsical idea that I could get away with writing a few stories here and there and never share them, never let anyone know what I was doing into the wee small hours of the night, never need to write another story. I could stop when I wanted.

And now I cannot stop, nor do I want to. There are many days where I write long exciting stories that make me sway and smile in my office chair. Many of these days I simply tuck the stories way into an obscure drawer safe from criticism. These are my babies who you will probably never meet. They are far too fragile and too dear to offer up to other eyes, but the eyes aren't really important. It's the sacred space of communicating the subjective world. I am witness to my beloved friends and family and strangers, and every night I bear witness to the world. 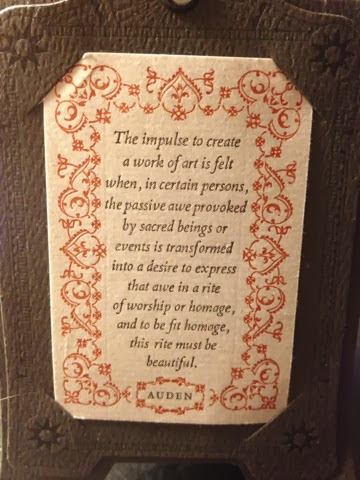 In five years, I have honored this love of stories. In five years I have grown. And maybe someday I will stop writing altogether. But what I can tell you now, friends, is that today is not the day.