When I grow up, I want to be an old fart.

I take a slice of butter just off of the top of a butter stick that went cold and hard over night. A friend  took her toast with four large hunks of butter just like her eccentric father. "One for every bite." 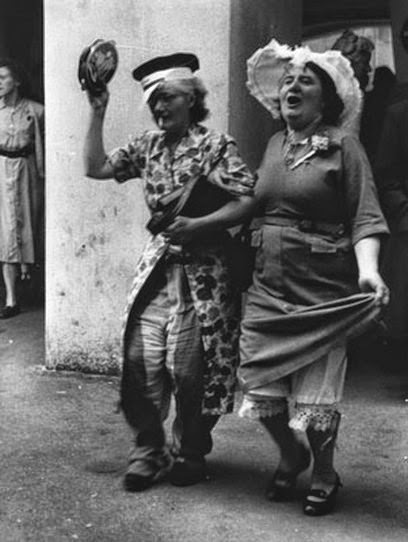 Maybe she hadn't said eccentric, but that is how I imagined our conversation--the two of us talking about the eccentric, old creatures in our lives.  My own great-grandmother once sprained her ankle falling off a ladder and, upon being told to wear some sort of compression device, spent six weeks wearing patent leather go-go boots.

The old creatures don't just butter their toast, they argue with their philodendrons, flirt with whomever they like, and schlep ten pounds of rhinestone jewelry (evenly distributed, mind you). Celebrated as odd and remembered as legend, the Old Eccentric Creatures inspire art, stories, and the occasional shudder from us not yet old/eccentric.

I want to be someone's Old Eccentric Creature. I want to become that old woman at the concert whose dancing resembles some drunken train wreck who transfixes an entire audience. I look forward to offering applause with pendulous, unbridled breasts that slap together when I dance. I want to wear more rings than I have fingers for and bright red lipstick and perfume that makes people winded or dizzy. I want to read the paper aloud to myself in the library and use the royal "we" in conversation. 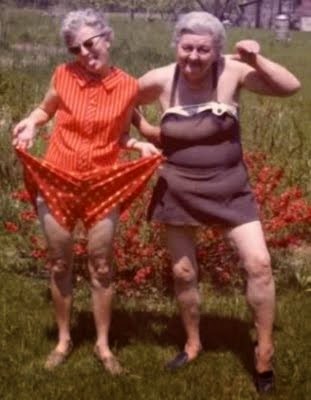 In practice, I should find my inner Eccentric Old Creature.

I practice nibbling donuts in strange ways, hoping that someone would say, "oh, heavens, will you just look at that old, eccentric woman nibbling her donut in such an old, eccentric way," and then I remember that eating donuts in the bathroom, though it may be strange, will not be observed in a manner which I am comfortable with experiencing.

Unfortunately, I've met some road blocks. My grocery cashier isn't young enough to flirt with, jewelry just leaves green smudges all over, and Courtney Love already perfected red lipstick with enviable skill. It appears that giving a shit about not giving a shit is self-defeating.

Perhaps with age comes the notion that after the kids have grown and we're all sweated out from our nimble, haggard years at the grindstone, we become entitled to our fancies, our whimsies. Perhaps I've not yet perfected my butter-to-toast ratios just yet.