Let's talk about poop: This is why I can't socialize with real writers.

Being around artist-type people terrifies me. I get sweaty-lipped and tend to stammer. This weekend, at the Mazama Festival of Books, I did just that among some of the most brilliant current writers.

This was the Book Fest's second year. After being present for the first, I can tell you that this festival is growing and getting better every year. The minds brought together to discuss the world as seen through today's artistic lens were nothing less than magical. 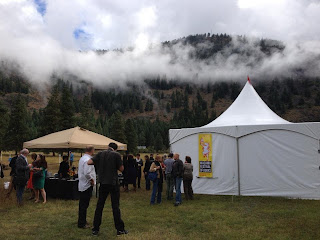 Mazama is a small town tucked tightly in the bosom of the Cascades. The view of  mountains' cleavage from the valley floor is enough to leave your jaw collecting pine needles on the ground. This glorious sight provided the backdrop for the audible feast provided by an armful of bookwriters.

While taking notes for each session, I realized that I had written "BUY THIS BOOK!!!" next to each author's credits. From discovering identity through travel to finding oneself in confronting violent death, these authors offered their audience more than just a snippet of their works: They offered us glimpses into their psyches and souls and craft.

The artists spoke with tongues attached to well-oiled mindmachines. Each word resonated. But again, these are published writers. They have reached the shiny polished pinacle with their names embossed on the glossy covers of tomes and chapbooks alike. I want a glistening tongue attached to a keen machine mind like theirs.

For now, I just listen.

But as I listened to one of the sessions (from a perch far in the back), a woman came up and rubbed my head then apologised quickly. "I'm so sorry," she said. "You probably don't like that."

"I love it, actually. I shaved my head to become vulnerable, and as it turns out, people are far more gentle that I give them credit for. It is myself who is the harshest, so please, pet me. I really love the intimate affection of connection."

This is what I have rewritten as a response. I really said something like, "uh, that's all right. It feels nice."

If James Joyce were listening, he would have beaten me with Dubliners for my flaccid use of "nice."

During the social hours, I stammered at some brilliant people. "So what do you write?" I was asked.

"Y'see I haven't published anything in years because all that I've done is talk about the toilet habits of children while more or less avoiding my deep-seated personal issues and now I'm just trying to make sense of my seemingly shit-filled existence with real introspection, substance, and empathy. I strive to acheive ultimate vulnerability and thereby flourish in a world that doesn't beg the question, 'number one, or number two?'"

This is what I wanted to say, oh yes. But I really said, "Oh, I've written a novel and a screenplay and a bunch of short stories, but mostly I blog on the internet about being a mom. It's mostly toilet humor."


Toilet humor? Yes. That's what I whiddled my writing down to. Poop. At this point the writer's gaze would lift to the crowd around, looking for an opportunity to exit the conversation.

Standing alone within a writhing and bubbling milieu I so wished was mine, I made a vow: No more toilet humor. No more stories that involve the gory details of a mother. I would write beautiful prose...or at least I would write until I got there.

Twelve hours into our book-filled day, I scooped my chitchattering imps into the car. We sighed a collective thanks-- thanks for the beautifully dynamic day, thanks for the brilliant gift of art, thanks for the other children who played so well in spite of the erudite cultural aura hovering just above the valley floor. We listened to the calm the evening gave us. This lasted for a miraculous 45 seconds before-

"I took a poop in the outhouse today. It smelled really good. And the water was still blue!" 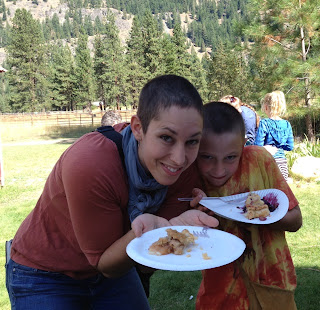 I guess my muses won't be like this forever. What I know will grow soon enough. Until then, there will be toilet talk and all the rest that comes with parenting.