In all honesty, it is a wonder how either me or my sister survived our childhood. We were positively wretched to each other.
Granted we did not arrive to adulthood unscathed--I still feel mentally inferior to everything on two legs while my sister probably has patches of hair still missing or perhaps she's developed an irrational fear (perhaps rational) of slugs being dropped down her swimsuit--but in thegrand scheme, we survived (and neither of us can afford therapy which is probably the reason we just chose to soldier on).
But in all the terrible experiences, we had truly good moments as well.
I remember how we'd spend countless car trips reenacting our favorite death scenes. Taking turns fading into eternal slumber, our eyes would roll back and flicker and with our last living breaths we'd say our labored final words.

One of us was better than the other, mind you. One of us is now a professional actress in Seattle and teaching at a schmancy art school. The other one lives in a trailer by the river and still has yet to perfect artfully playing dead...no matter how many Saturday mornings I work on it.

Over the last fifteen years the two of us have barely occupied the same room. This is not (entirely) because we dislike each other or disagree about everything and fight like sisters, but because we are just so damned busy.

But this weekend I had the blessed opportunity to visit my sister in her natural habitat: Capital Hill, Seattle, WA, also known as "civilization." Less than a block from the bustling Broadway, I took my children hither and thither with the aid of my wonderfully giving little sister.

She took us to her band practice, a punk band that covers show tunes called Argentina Weeps. They were magical. I knew (almost) every word and sang them proudly....not that anyone would know. My son, less experienced with ear-splitting punk, assumed the fetal position in his sister's lap, his hands over earplugs in ears. He puts the "feral" in "feragile." Okay, maybe that was just concocted at this moment, but you get the picture.

My sister and I went to dinner. It was perhaps the first dinner hermana a hermana in ever (literally). We caught up on our lives. And really it was more like an introduction. This was not the bratty girl who'd fall to the ground and blame me for hitting her. This was not the fresh-chested sophomore in highschool I had last lived with. This was a woman. A beautiful, and capable woman whom I am truly lucky to have as a sister. She's smart, not a smart-ass. She's graceful, not a gangly, awkward teen. She is hitting her stride, and I'm fortunate that I get to see her (even if it is just a few times a year) in action.

We met up with a girlfriend later, a girlfriend whom I haven't spent a whole lot of time with in 12 years. She is now friends with my sister. We all laughed and walked hither and thither around Capital Hill, chatting and catching up. 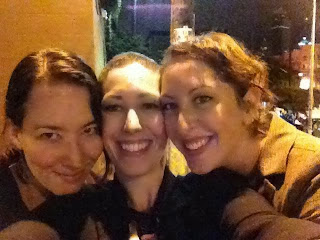 And in all of the glorious moments of the evening, my favorite was the walks spent giggling with one another, learning each other for the first time as grownups.
Posted by Din Mutha at 8:59 PM