Okanogan County, located in North Cental Washington, is not known for its glamour or turbulent history or anything interesting. Hell, the majority of the world will continue ticking away without ever knowing of its very existence. But nestled in the Tonasket highlands, far away form peering eyes, a mass of counter culture throbbed like a heartbeat this weekend.

Barter Faire celebrated its 40th year this weekend as vendors and buyers ascended the steppe. Each year the faire grows and an estimated 10.000 people from all over WA and beyond make the annual hajj. Artists, artisans, junkers and food vendors begin arriving on Thursday to set up camp and the Faire opens Friday morning. By Saturday, the hay-laced paths are teeming with semi-naked children and fairies and gypsies and steampunks and old wise shamanic hippies. 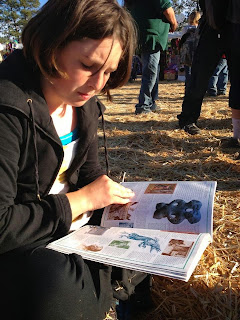 My daughter is a Barter Baby. Her first Barter Faire was on her due date. Me and my partner at the time had a booth and we set up, not knowing how long we would be up at the faire. She was patient, thanks for asking. We attended every BF until we moved to Alaska four years later.

After our long hiatus, I figured that everything would have changed. I was right. And wrong.

The sense of wonder never fades. Happy hippies great and smile at you from every direction. The echoed cries of "Barter Faire!" are met and passed on through the crowds. People wish you a happy Barter Faire as if it were some grand holiday. But really, it's kind of like hippy Christmas. It's where you can find anything you weren't looking for at the moment but need. Contrarily wise, if you are indeed looking for one particular item, you experience the dreaded illness of "Barter Blindness."

We found some books at a booth where the vendor was brains-deep in an art project where he assembled the random bits and tchotchkes of his bedraggled wears-blanket into a giant form that wiggled in the breeze. We asked for the books. "Whaddya got?" He asked.

This year, we hadn't brought bartering gadget or doodads or trinkets or nosh to trade. My daughter said, "you like food? How about some apples?"

The man smiled with his teeth hiding under a mass of mustache. He tipped his top hat and along with our mythology and Tolstoy we went hunting. After nearly 30 minutes of perusing the market, we realized the apples had been hidden. "Barter blindness," I told my daughter.

We gave up on our quest and settled for trading some oatmeal cookies from a bakery/taxidermy/tool shop with our goods. We found the apples in the booth next door.

But that is the way of the Barter Faire. It is an imp with a mischevious mind of its own. It will swallow friends up whole until you've nearly given up looking for them and will finally spit them out right in front of you, beaming and dripping with goodies.

The Barter Faire is a sneaky one. And there are rules:
1) You will never make money at a Barter Faire. You will come out even. You will go home happy and fulfilled, but you will never roll in dough.
2) You will lose yourself/whomever you are there with. You will find yourself. Your friends will find themselves. Your faith in humanity will be taken away and then restored with one breath.
3) You will need to use a honey bucket. It will be unpleasant. You will only add to the unpleasantness of the honey bucket. This is commonly known as "Barter butt"--a hippy Montezuma's revenge--that is most often experienced after an indian taco. The indian taco wafts through the air and is a siren's call for your gut. It will become your undoing.
4) Be weary of homemade baked goods sold at the Barter Faire. Look for the "child friendly" versions of food. Weed is a featured ingredient found in most baked goods, goo balls, pumpkin creamcheese rolls, and granola. And tinctures. And oils. And smiles.

The drug culture of the Barter Faire cannot be hidden. It is present. My daughter learned what pot smells like this weekend. It is, however, much more safe in that the security forces have made it so people do not smoke pot openly. Fortunately, as pot is now legal, the security volunteers waste much less time on pot and focus more on the other illicit drugs. They were much less apparent this year.

Of all the Barter Faires I've attended, this one felt like it was the most kid-friendly and the most safe. The focus on family (along with the name change to the Okanogan Family Faire, though nobody calls it that) truly shined through this year. Beautiful children played in Child Haven where they could take parts in crafts or talent shows or storytelling in the tipi or just frolick with all of their newly made friends.


Strategically across from the Haven was the most phenomenal booth ever: Blissful Wunders Confectionery Chocolats'. Bliss stood behind tables piled high with gorgeous truffles. He wore a top hat peppered with pins and buttons. He offered a smile along with a small, flat pure chocolate chip.

Bliss redefined how I conjure up Willy Wonka in my mind. He is no longer a tall and quirky Gene Wilder. He is big, bold and speaks like he was plucked from the Bronx. But his language is what made me realize that chocolate is magic. He talked about how he'd add lavendar to his mint truffles to create a balanced flavor. He talked about how flavors mingled with ingredients in a refined chocolate experience.

Cracking the shell of my pomegranate wine truffle was like knocking on the door to extacy. The truffle melted into my tongue and brought me more joy than I've ever experienced from food. I almost blushed at my completely hyper-sensual experience in front of this Trippy Hippy Willy Wonka. He smiled like the expression on my face was a familiar one. He raised his hands into the air and chuckled, "I ship to everywhere!" 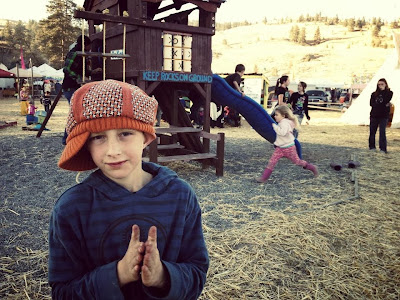 Strangely, the next euphoric moments seemed to pass unnoticed. I was swallowed up by Barter Faire and spit out right in front of the main music stage where "Mighty Lions" played reggae into the dusk. We danced, my children and I, under the haze of woodfire and dust. My previous partner (aka Dad of my babies) watched us happily as he fell victim to the indian taco.

We danced, me, my daughter, and my breakdancing son. We spun and hopped and smiled together. A man, noticing my son's breakdancing (thrashing on the ground), he clapped and laughed and taught my son some more moves. I thanked the men who thanked me back. 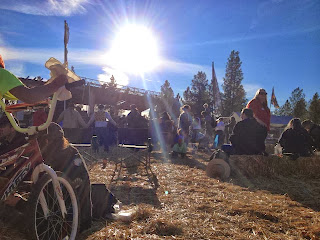 We were connected with every person in front of the stage. But in the larger perspective, we'd become connected to all the other 10,000 weirdos, hippies, wackos and wild spirits within our proximity. We came to celebrate the union of creative people and alternative thinkers. And as the moon rose above the giant festival, we became as full as she was, shining brightly over valley. And filled with the goodwill and love for our fellow humans, we left the Barter Faire, completely filled with the spirit of Hippy Christmas.